A teacher at Glimåkra folk high school persuaded Abdullah to have a go at riding. He tried once, and was hooked. His seriously impaired vision is no obstacle.

Bea, a half-blood, stands waiting for Abdullah in the Indoor riding area in Glimåkra belonging to Glimma equestrian society. It’s time for his weekly riding lesson.

Abdullah mounts the horse and goes out into the ring.

Berit Stigsson, one of the instructors, is standing in the middle. She says they are going to do some jumping today. Both Abdullah and Bea the horse like that.

Abdullah rides towards the fence, Bea jumps over.The fence is gradually raised until it is 60 centimetres high. Horse and rider sail over.

”I’m driven by things that develop me. If nothing happens, I soon get bored”

After the lesson they are both pleased with their performance.

Abdullah ties up the horse in the lane between the stalls. He takes off the saddle and all the equipment.

Abdullah Aamar, aged 23, has seriously impaired vision. He has only ten per cent vision, he has difficulty in distinguishing details, and he is sensitive to light.

Abdullah has been riding for a year. He has already made good progress.

– It’s the first time I’ve jumped so high, he says with a smile. 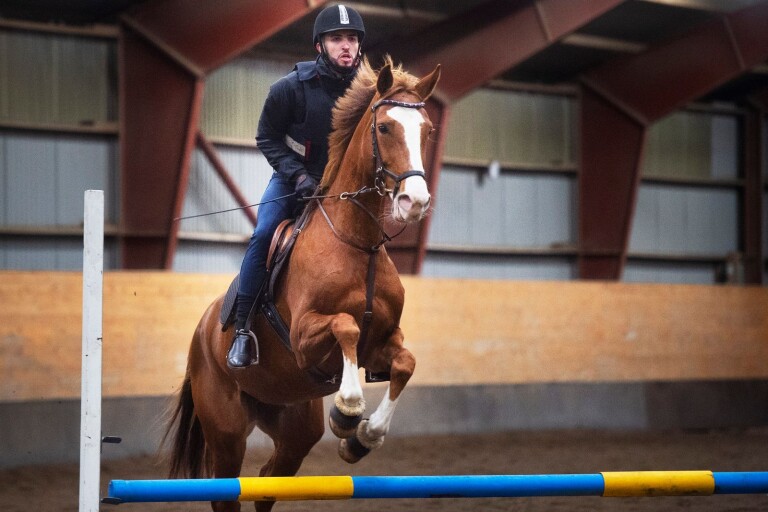 Foto: Lasse Ottosson
Abdullah doesn’t see the fence until he is very close to it. This time he and Bea manage a 60-centimetre jump. ”That’s the first time I’ve jumped so high”, he says. 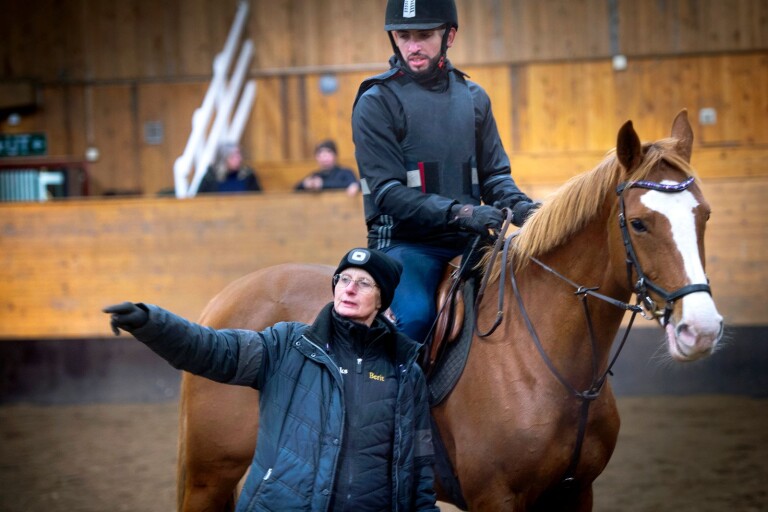 Foto: Lasse Ottosson
Thanks to riding instructor Berit Stigsson it all works very well, says Abdullah Aamar.”She is very patient with all my questions”.

He can’t see the fence until he is very close to it. But he trusts Bea. And with clear instructions from the riding-instructor the jumping goes very well.

Once or twice he and the horse have had a difference of opinion.

– For example, when she started to gallop. I lost my balance then. I was going right and Bea was going left. And the first time we jumped, I wasn’t expecting her to make such a big jump, says Abdullah. He had to hang on to Bea round the neck to keep from falling off.

He likes trying new things, and he likes speed.

– I’m driven by things that develop me. If nothing happens, I soon get bored, he says.

Abdullah is studying the general course at Glimåkra folk high school. He started on a different course at the school six years ago.

– I started there because I wanted to learn to be able to manage day-to-day things on my own. Now I’ve done things I never imagined I’d dare to do, and I enjoy going to school.

”I’m longing to ride out into the woods and gallop”

He is also active in Unga Synskadade Syd (for young people in Southern Sweden with eye defects), where he is chairman.

Abdullah often sits in the stand when others are training their riding.

– I usually film them on my phone so that I can look at them more closely.

He feels secure on horseback.

– At the beginning I was scared to bend down and scrape their hooves, but now I’ve learnt what to do.

– It’s thanks to Berit that everything is going so well. She’s very patient with all my questions.

– Lots of things you do, you do without thinking. And it can be hard to find a good way of explaining. Although it usually works out,she says.

– Riding is good for people with impaired vision. It helps with balance and gives good posture, and you relax, says Abdullah.

– I’m longing to ride out into the woods and gallop. 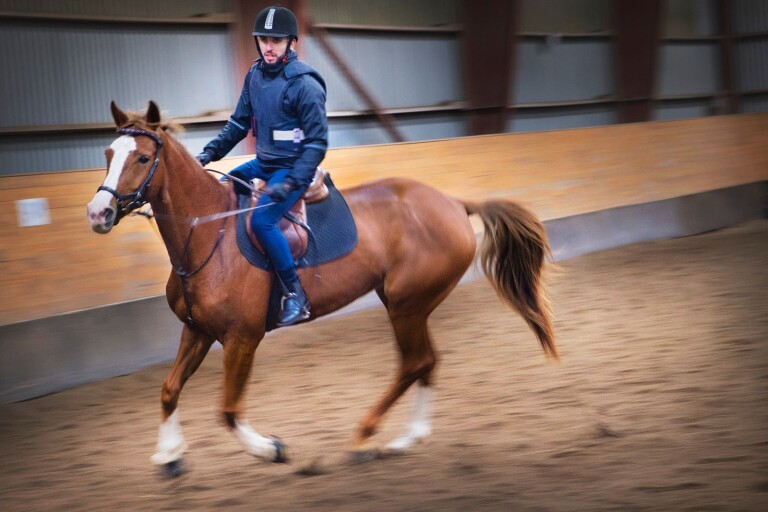 Foto: Lasse Ottosson
Abdullah Aamar goes to the riding-school in all weathers. ”To begin with I was scared to come here on my own, but I do it now even although it’s dark. I’m practising not being able to see at all,” he says.